From the blog "Pre-historic stone works in the Town of Catskill": 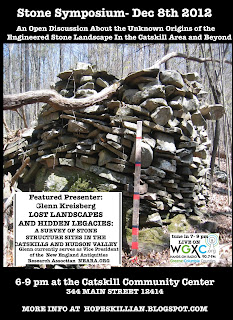 Stone Symposium Saturday December 8th at the Catskill Community Center and Live radio Broadcast(wgxc.org) 6-9 pm Radio broadcast 7-9 "An Open Discussion about the Unknown Origins of the Engineered Stone Landscape in the Catskill Area and Beyond" Free and Open to the Public for Images and more info: www.Hopeskillian.blogspot.com Symposium Location- 6-9 pm Catskill Community Center 344 Main St Catskill NY 12414 6pm meet/ greet/ look over materials begin discussion..Note: There is a gallery to display any pertinent materials. I'll hang some of the old maps of the Kiskatom that reference the existing stonework. 7pm- begins Broadcast on WGXC 90.7 fm Participants introductions 7:30- Glenn Kreisberg Powerpoint "Lost Landscapes and Hidden Legacies: A Survey of Stone Structure Sites in the Catskills and Hudson Valley" 8:30 Q and A- Wrap up 9pm Broadcast ends- Continue Conversations..... Participants (so far)- Harry Matthews- Stone Balancer from the Hill Falls road area Jared Handelson- Resident of Kiskatom who’s had a long interest in the Lithic sites of this area and around the world. Glenn Kreisberg- Vice President Of New England Antiquities Research Association (neara.org) Laura Anderson- Moderator Matt Bua- Recent Kiskatom resident who realized many of stone “walls” in the area existed before the arrival of first Europeans... Sam Sebren- Broadcast Engineer
Posted by theseventhgeneration at 8:23 AM 2 comments:

More rock piles near the hayfield

At the beginning of this month, I took a hike along the Finger Lakes Trail and found 14 more rock piles in an area I've posted about before, here: Rock Piles: Row piles and a small site - NY and here: More from Google Earth I was trying to keep a tally of the number of rock piles in this area, but it seems I've lost my tally sheet. I want to say that there are over 30 at this site now. Some others I've found, further to the west and in the woods, I have yet to post about. Here are the ones along the trail.

I don't like this new style of Blogger, in either "Compose" or "HTML" view. It seems impossible to move photos around.
Posted by theseventhgeneration at 9:22 AM 4 comments:

This is really "old news", but I just realized that I never posted pictures of the platform cairn from Pepacton on the web. I've been linking image locations with Google Earth on my computer, so it helps to have the image posted somewhere, in order to create the link. At any rate, here are a couple of images of the big platform cairn. Still photos don't really do it justice, as it's large enough to park 3 cars on it, end to end.

Posted by theseventhgeneration at 9:14 AM 2 comments:

This is a new DEP area open for hiking. I stumbled on it when riding around the back roads of Delhi (the same Delhi, NY which is the setting in "My Side of the Mountain"). Because I only had a few minutes to explore, I can only say that this is a south-southwest facing mountain, and the site is between an outcrop and a swamp, at a decent elevation (about 2200 feet). Not surprising, the rock piles I found were all pretty small (I say this because my experience is that east facing rock piles I've found are generally larger). Here are some pictures: 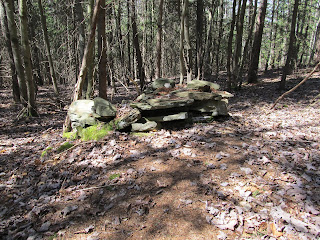 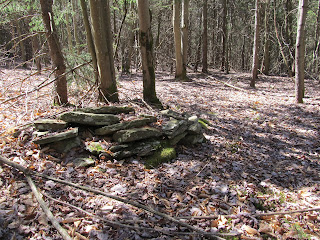 This one is closer to the outcrop than the others: 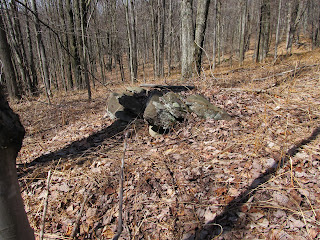 This is a very large boulder at the site, with only a few rocks on top: 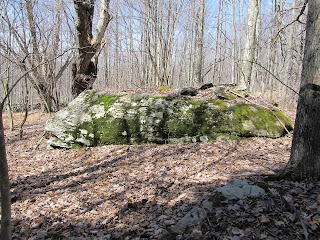 I should mention, too, that it is very, very dry in the woods right now. 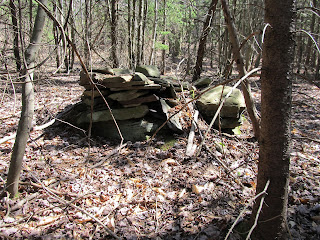 The funny part is, I found a couple of mylar balloons at the site, which is also common. I think it has something to do with the elevation. At any rate, I picked them up and put them in my back pocket, along with the white ribbon. After my hike, I headed over to the local grocery store to buy a sandwich and, after checking out, found that I was walking around with this very long ribbon trailing out of the back of my pants!
Posted by theseventhgeneration at 7:15 PM 2 comments: 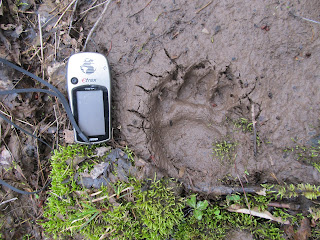 Also, a male Ruffed Grouse trying to attract a mate. I drove by him, backed up, then started taking pictures and he still didn't fly away. He was shaking his head so much, I couldn't get a good picture of those neck feathers without the blur. 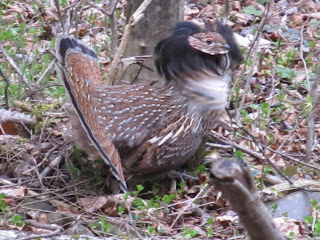 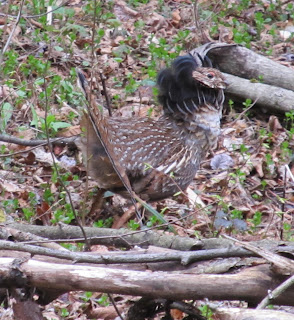 Starting at the top of this site, there is a conglomerate of structures which appear agrarian, but for what purpose, I couldn't say: 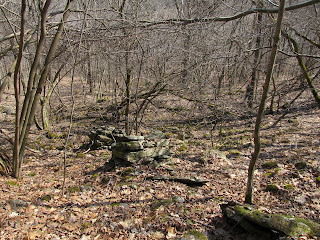 Above, you are looking at a series of row cairns which could make up a fence row (only one line, however...there is no enclosure) and something like a stone foundation at the bottom, right where that bent over tree is in the photo.

But, going into that stone foundation (I'm calling it a "foundation" because one line along the foundation is very straight, but the rest of the structure is garbled in with the landscape), I found this: 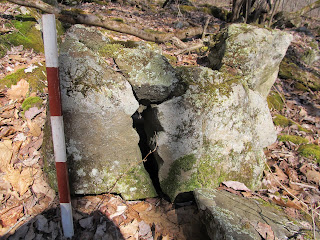 Walking further to the south and east, there are rock piles that take on a much more random appearance, yet still look something like a grid. Notice that semi-upright stone in the near distance. If you click on the photo, you might see another rock pile in the far distance, offset from the semi-upright stone: 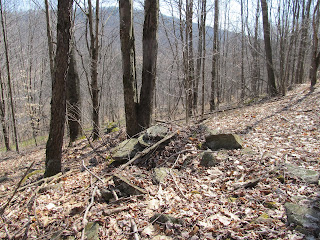 This picture is taken from the semi-upright stone, with the next rock pile in the distance: 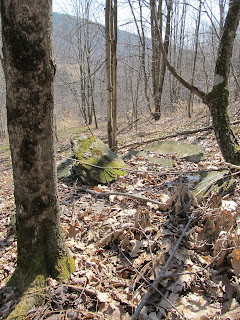 Now, is this just me, or does it seem like, in the two previous photos, that you can somehow line up those rock piles with something along the horizon? I am still trying to figure that out.

Here is the beauty that was in the distance from the previous two photos. Notice the little rock on top? 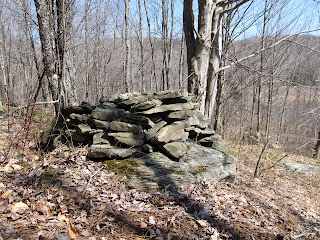 Here's a close up. I took it at this angle purposely, to show the stone just to the left, with the Manitou shape: 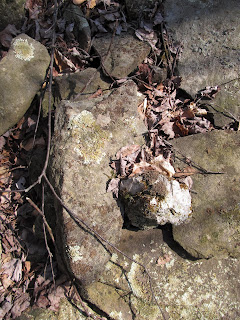 Then, a bit further to the south, another rock pile, this one near a spring, again lining up with the rock pile with the quartz on top (that pile is just behind the apple tree in the background). 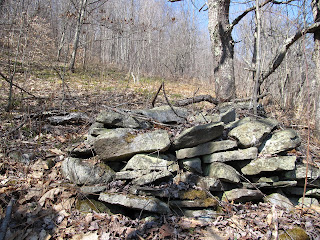 Another pile further south, this one is disheveled: 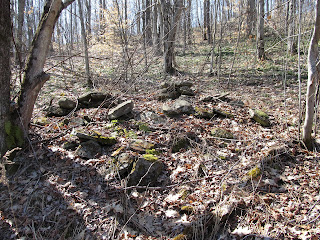 There is agrarian evidence nearby. Stone walls at the top of the ridge, something like a dam or a mill down in the valley, and a stone foundation near the old road (that one shows up on the old 1926 USGS map). So, a lot of this site has me perplexed, especially with that nice rock pile with the quartz right in the center of all those rock piles.
Posted by theseventhgeneration at 9:24 AM 2 comments:

Back to Johnny Brook (click the link and scroll up to see the prior post). The DEP opened up more hiking land in this area. There is a lot of land to explore here. Three thousand seven hundred ninety one acres, to be exact...give or take because some of it is posted off limits, but the map doesn't show that part.

I visited two sites on this hike. One is to the north and the other is to the south. Both are small sites. This post is on the site to the north, with an honorable mention to a rock pile in between both sites.

The site to the north is in the Johnny Brook hiking area, but, to be accurate, it overlooks Barbour Brook not far from where Barbour Brook meets Dry Brook.

This is one of the first rock piles we walked up to approaching the site. 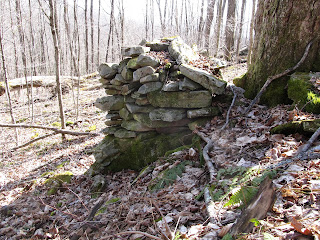 The base looked bird-like to me, from this angle: 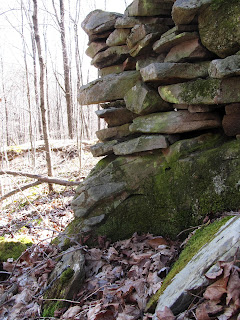 Another angle of the same rock pile, this time looking slightly testudinate: 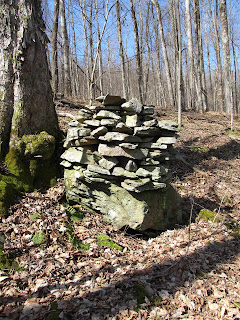 A small rock pile in between some larger ones: 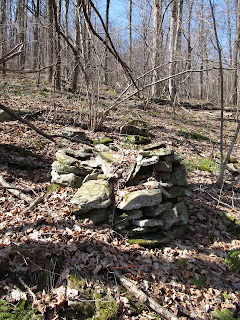 One of the larger ones, from an angle where 4 upright stones are in front of the boulder: 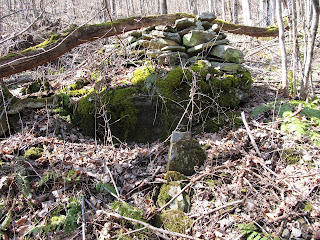 This one, no doubt, is a turtle: 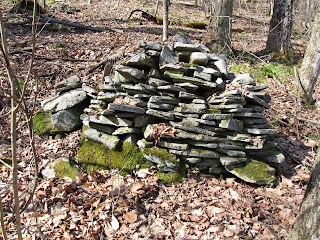 This is the honorable mention rock pile. It is near the trail, at the base of an overgrown field. The shape and fact that it's constructed between two large boulders is intriguing. If its purpose was for clearing a field, there appears to be a hollow, or caved in section (seen better in the first photo below), which would have made a good place to pack clearing stones instead of constructing loosely: 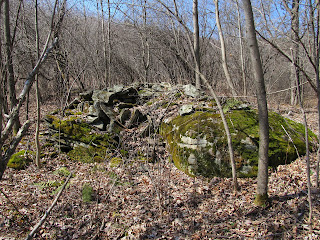 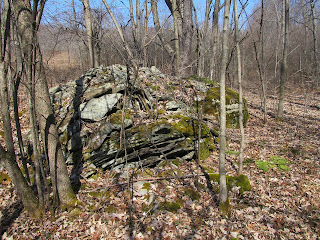 I'll post about the site to the south later.
Posted by theseventhgeneration at 7:26 AM 2 comments:

theseventhgeneration
I live in upstate NY and enjoy hiking through the woods. I truly believe this statement, from "Alternate Version of 'Rainbow Crow'" – by Chief William "Whippoorwill" Thompson: "...it is more important for an individual to search for his own answer to a question then for someone to tell him the answer directly." You can contact me at happyrockhunter at gmail dot com.