The Story of Teunis

I've walked here many times, but not exactly up the creek branch, as I did this time.

Before I post the pictures, and because blogger is not letting me upload photos right now, I have a story about and Indian named Teunis (or sometimes spelled 'Tunis') who used to live east of here. There is a Lake in Andes named after him - Tunis Lake. The link for the complete story is here. But, if you want the abridged version, he was known to have made a short journey (a few days from his home) to obtain lead to make balls for his rifle. This gave rise to the belief that there is either a mine or cache of lead somewhere in the area, however, it has never been found.

Then, I found a short story about Native Americans at the same website, within the history of the Town of Tompkins. Click here for the link. It's the second paragraph, but if you don't want to read the whole thing, the part that I found intriguing (in addition to the story about the Indians coming to Tompkins in a canoe from Equinunk), was that the Indians went up the river to gather lead ore from a mine near the mouth of the Astraguntira. Reading further in this same article, it says that the Astraguntira is "now Cold Spring Brook".

The creek bed where I started walking is very nice - easy walking and peaceful: 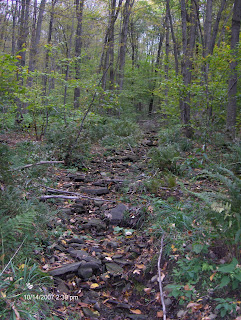 There didn't appear to be much around, but the first thing I came upon that was curious was this boulder with rocks on top: 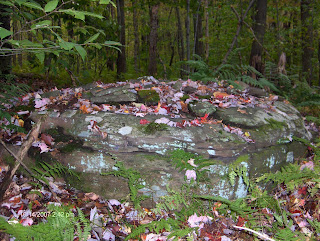 This is a close up of one of the rocks on top: 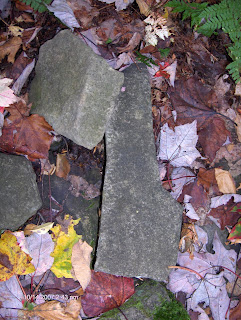 Then, a little further up the creek bed: 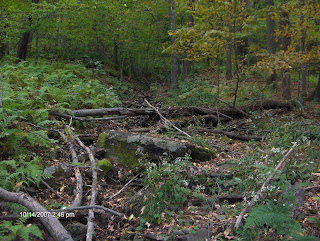 I saw this to the right: 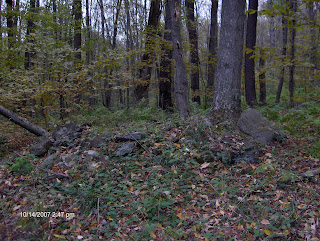 I was having a little trouble thinking about the pile because the upright rock was distracting me. I couldn't figure out if it had been placed this way, or if the tree that sprouted in the pile pushed the rock up into that position (I think it is the latter). So, I tried to observe the rest of the pile and forget about the upright rock. Walking around the pile, I saw this: 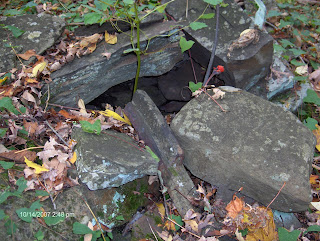 Now, as soon as I saw this, I thought "this is exactly the same thing I saw on the Rock Piles Blog!!!" (Tuesday, May 23, 2006) click here, so I was very careful to take a close up of it, which turned out blurry because my arms are so short... 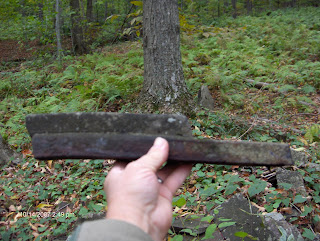 ...and put it back exactly the same way that I found it. 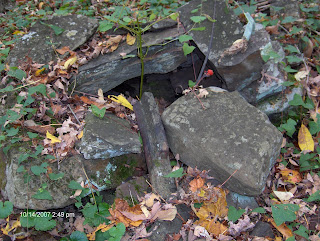 I was really glad I read about this being a ceremonial pile on the Rock Piles blog first. Otherwise, I would have thought the piece of metal was 'somebody's garbage'. It wasn't until after I got home that I started thinking about the story of Tunis and the lead. I can't help but wonder if the piece of metal has something to do with the lead mine or cache. I didn't have a magnet with me to see if the metal was ferrous or not. It had some rust, but not a lot. It was very, very heavy.

Here is another view of the rock pile, with the piece of metal visible in the pile - you may have to click on the photo to see it. 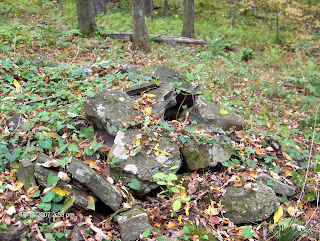 I'll try to post again tomorrow with more photos of my walk. There is a lot in this area.
Posted by theseventhgeneration at 8:45 AM

For some historical perspective on why we find such objects in ceremonial piles, here's a quote from Thomas Mayhew, Jr. -- pg. 187 in Henry Whitfield's, "Strength out of Weaknesse" (1652)

"And as himself said he had been possessed from the crowne of the head to the soal of the foot with Pawwawnomas, not onely in the shape of living Creatures, as Fowls, Fishes, and creeping things, but Brasse, Iron, and Stone."

theseventhgeneration
I live in upstate NY and enjoy hiking through the woods. I truly believe this statement, from "Alternate Version of 'Rainbow Crow'" – by Chief William "Whippoorwill" Thompson: "...it is more important for an individual to search for his own answer to a question then for someone to tell him the answer directly." You can contact me at happyrockhunter at gmail dot com.